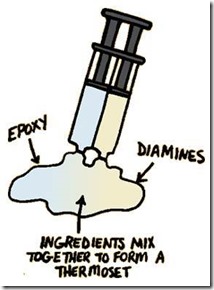 In our last post we talked about epoxy resins used in thermoset applications.  There are many different types of epoxies with various molecular architectures so epoxies are a very versatile thermoset building block.  But they can act alone, then need an accomplice!  Diamines are the most common epoxy curing agent, sometimes also called a hardener (i.e. combined with epoxy resins they cause the thermoset to harden via crosslinking).  There are also catalysts used, but sometimes this gets confusing since some catalysts are both hardeners and catalysts, so for the sake of this post we will cover only epoxy curing agents.

As one can see in the cartoon above, the typical two part epoxy has a resin component and a curing agent component.  As an example, for an adhesive application,very fast curing is required, so mixing both components at the factory would not be feasible.  The manufacturers use clever packaging to keep the two parts separated and at the point of use (gluing your broken parts together) you dispense the two parts, mix thoroughly to disperse the curing agent into the epoxy resin and allowing the curing reaction to take place.  So happens during curing?

The first part of the cure involves the reaction of the diamine with the epoxy group.  In most cases a diamine with a functionality of 4 due to the four active hydrogens on the ends of the diamine.  The initial part of epoxy curing is predominantly linear polymerization as seen in the following figure: 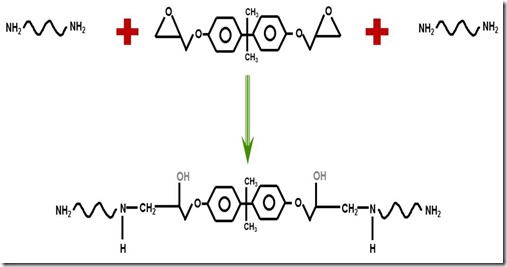 The first reaction of the amine with the epoxy group causes chain extension but the growing chain continues to have reactive species at either end.  In the figure above, the primary amines (two active hydrogens) are on each end of the growing chain.  As more amines and epoxies react, chain extension (an subsequent increase in molecular weight) is the dominant reaction pathway. 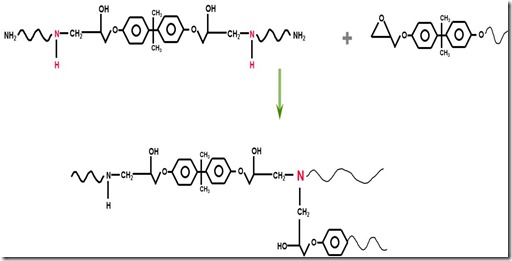 As the growing linear chains now begin to crosslink, the molecular weight increases very quickly since each crosslinking reacting not only brings together more small molecules (epoxy and amine monomers), but now crosslinks longer chain segments.  As the reaction continues an infinite network of polymer chains is formed.  It is the crosslinks that give thermosets their unique thermal stability.  Crosslinks and the resulting network are formed by chemical reactions, then when a fully cured thermoset is heated above it’s glass transition temperature (Tg), the material softens but cannot flow.

The chemical structures of some typical amine curing agents for epoxy are shown in the following figure: 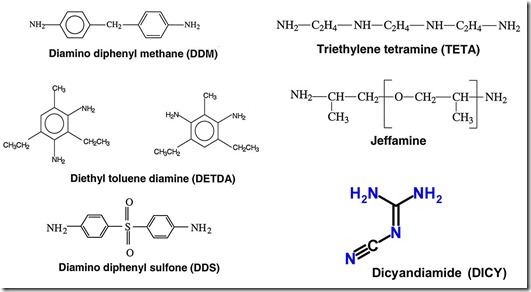 These are called primary amines since all have the –NH2 group (with two active hydrogens).  The figure above shows diamines which are used to crosslink since their functionality is four.  In the next post we will show how different epoxies and curing agents can be combined to get unique properties.