The image below shows an SN2 nucleophilic addition to an epoxy group.  Whoa, this is real chemistry!

As I wrote this post, it harkens to the days when Morrison and Boyd was a constant companion in my backpack!  For those of you who might not be familiar, Organic Chemistry by Morrison and Boyd is a 1250 page classic textbook used extensively in “Orgo” classes when I was an undergrad in the 1970’s (ouch!).

In the last three posts we provided the basics for understanding the curing of epoxy resins with amine hardeners.  In this post we will take a deep dive onto the chemistry of the epoxy amine crosslinking reaction as an example of how chemical reactions cause crosslinking in thermoset networks.

Summary of nucleophilic addition to epoxies:

Reactive nucleophiles attach the least hindered end of the epoxide in an SN2 type reaction resulting in the formation of the more substituted alcohol.  Another way to think about this is that a nucleophile is a “hot tamale” at the dance looking for a “lonely carbon.”  The amine nucleophile has high electron density from the lone electron pair on the nitrogen, and the unhindered carbon on the epoxy ring has low electron density (remember oxygen has two electron pairs that withdraw electrons making the carbon electrophilic).  Let’s take a closer look on how epoxy is crosslinked by a diamine. 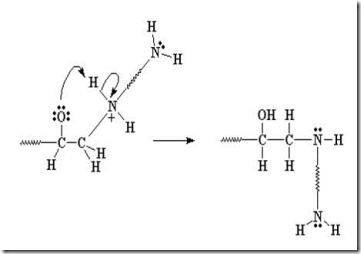 The oxygen’s extra pair of electrons abstracts a hydrogen from the ammonium nitrogen, making an alcohol group and an amine group (reforms the nucleophile which can react with another epoxy group). 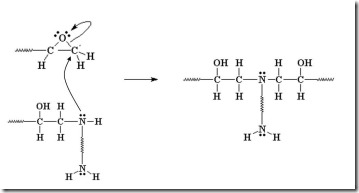 Another amine (nucleophile) adds to another epoxy group forming a tertiary amine (no longer reactive, since it doesn’t have an active hydrogen).

Two more epoxide groups add to the amine at the other end of the diamine, tying together two growing epoxy chains and forming a crosslink (red oval). 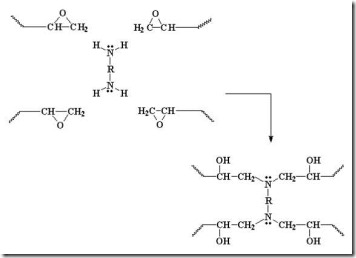 Diamines can form four bonds (f = 4 for most diamines) so they can build a network quickly.  With continued reaction of amines and epoxies, the molecular weight increases dramatically along with the crosslinking reactions results in a highly crosslinked network as can be seen in the following: 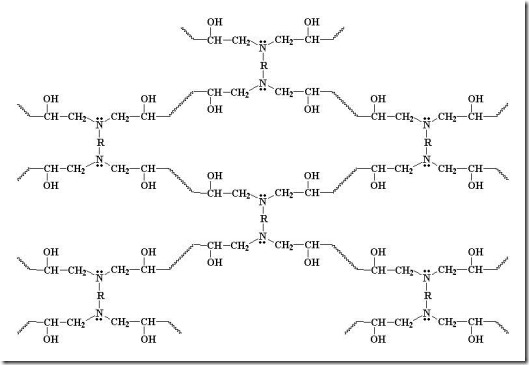 In the above schematic, the R in the diamine can be a variety of chemical structures from aliphatic chains ( for example the Jeffamines from Huntsman) to highly aromatic chains like 4,4’ diaminodiphenyl sulfone (DDS) used in structural composites.  As discussed previously, there are also a wide range of epoxies (aliphatic and aromatic) which can also be used to tailor the network structure and properties.

Now that we have established the basics of how chemical crosslinks are formed, the next post will give examples of how to “put it all together” to develop useful thermoset networks.