A previous post described the challenges associated with the future use of capillary underfills. The technical drivers for the next generation of underfills are:

Note: since the previous post, copper pillars with lead-free solder tips has replaced solder bumps as the preferred method to make chip-to-substrate interconnections.

The processes for each are shown in Figure 1. 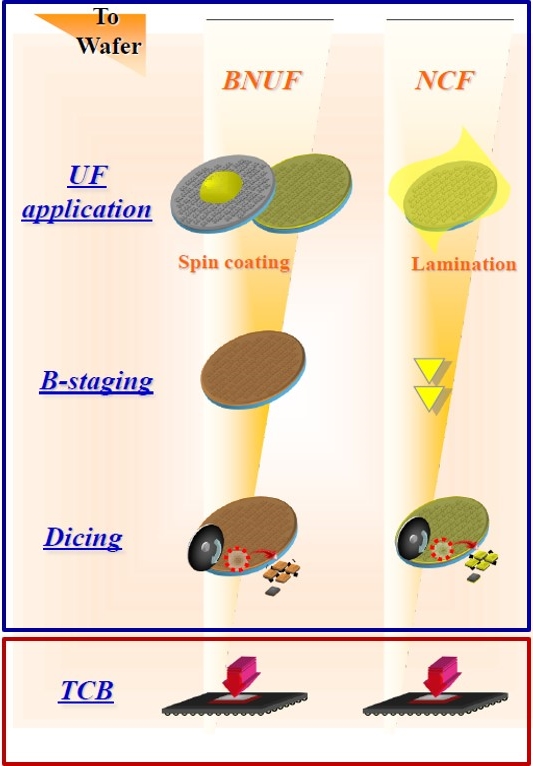 The process used for the B-staged no-flow underfill was presented in a previous post.

There are several material suppliers developing non-conductive film underfill such as Namics, Dow Electronic Materials and Henkel Electronic Materials. The wafer level underfill process shown in Figure 1 starts with the lamination of the non-conductive film.  In this case, the underfill film is manufactured in a separate process yielding a very uniform thickness, B-staged, highly-filled underfill film. Subsequent posts will discuss the materials available from several suppliers.  The NCF is laminated onto the top side of the wafer.

The process flow is shown Figure 2. 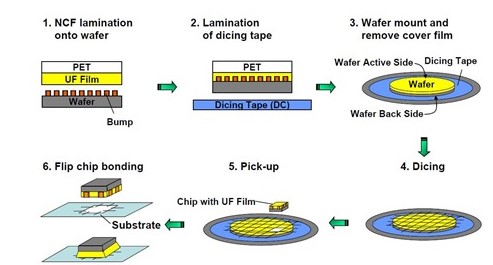 An additional challenge with the non-conductive film approach is that the film and B-staged properties have to allow:

The thermocompression bonding process is critical to achieve both electrical joining of the thousands of copper pillars and formation of a void-free underfill with a uniform fillet around the periphery of the flip-chip.

The TC bonding process is shown in Figure 3.

The interested reader may refer to a previous post on the details of the thermocompression bonding process.  Subsequent posts will discuss the various types of non-conductive films under development.