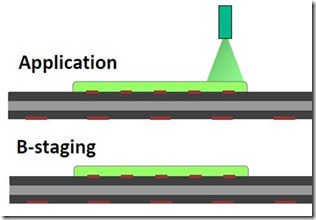 In the last post we outlined the technical drivers for underfills and showed examples of the first type of non-capillary underfill called No-flow underfill (NUF) and introduced the concept of thermocompression (TC) bonding as the process that yielded the best results in the past.

Both of these methods required development of new highly filled underfills but with the added challenge of also developing new ways to apply to the wafer.  The chemistry needed to be tailored to allow partial curing (B-staging) for:

IBM and Sumitomo Bakelite published a paper at the Electronics Components and Technology Conference (ECTC) in 2011 showing the following wafer level process: 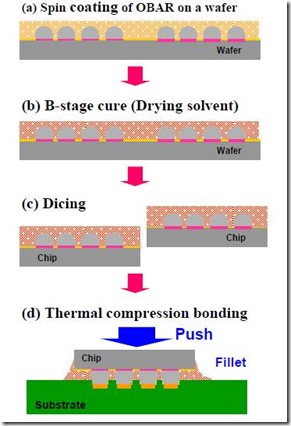 The above process uses spin coating to apply the underfill over the bumps in a process called OBAR, Over Bump Applied Resin.  After spin coating, the wafer level underfill is partially cured (B-staged) to allow successful dicing in the next step.  The final step in the process is thermocompression (TC) bonding.

Several material suppliers are developing non-conductive film underfill.  In this case, the underfill film is manufactured in a separate process yielding a very uniform thickness, B-staged, highly-filled underfill film.  The film is then laminated onto the top side of the wafer.  The process flow is given in the next figure: 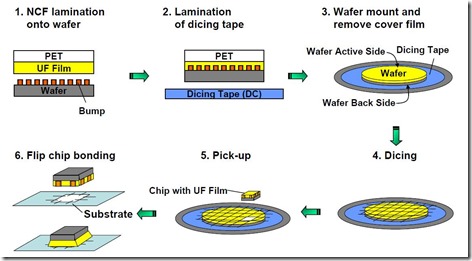 An additional challenge with the non-conductive film approach is that the film and B-staged properties have to allow:

In the next  post we will discuss in more detail the thermocompression bonding process.