To address the technical challenges, alternate underfill technologies have been developed:

The rest of this post will focus on non-conductive paste (NCP) and the thermocompression (TC) bonding process.  NCP is a formulated paste underfill that can be needle dispensed using commonly available die attach adhesive needle dispensing equipment.  The first step in the NCP process is to dispense the paste onto the substrate.  An example of an NCP dispensed on a substrate can be seen in the following picture (Henkel, presented at  the ECTC  conference in 2011): 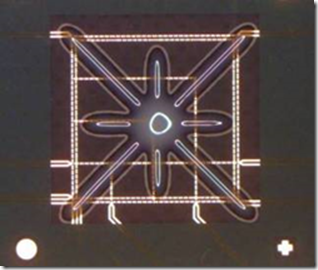 In this case, the typical asterisk pattern is used to ensure good flow and proper fillet formation after the die is placed.  The cured Henkel NCP underfill has a CTE of 31 ppm/C and a Tg of 208C by DMA.  The chip is attached using thermocompression bonding, with fast bonding time in the order of 4 seconds demonstrated.  The NCP has demonstrated MSL Level 3 reliability and showed no voids after 168 hours in HAST (Highly Accelerated Stress Testing), and no voids after 100 cycles in Temperature Cycling Testing (TCT). 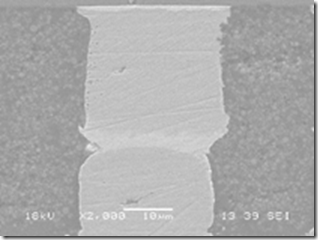 The thermocompression bonding process is shown schematically in the following figure (Source: Amkor)

Critical elements of the TC process are proper fluxing (without voiding), good interconnection (formation of metallurgical bonds), and no voiding during the curing of the NCP.  The manufacturing process throughput requirements are driving a 3-4 second total bonding time.  This is a huge challenge given the three technical requirements above.  Several equipment suppliers such as Toray and Panasonic have developed very sophisticated TC bonders for high volume manufacturing.  At the present time, the Henkel NCP is commercially available and some OSATs have begun using TC bonding in volume manufacturing.

In the next several posts we will address the many embodiments of wafer level underfills.