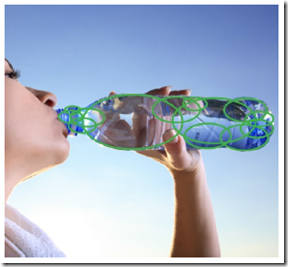 In our July 9, 2012 post we discussed the initiative driven by Coca Cola to develop bio-based plastics for beverage containers.  The first phase of this massive project has resulted in the Plant BottleTM which is made using bio-PET where the ethylene glycol starting monomer is made from renewable sources.  The Plant Bottle contains approximately 30% bio-based carbon.  But the project doesn’t stop there.  Coca Cola has established three R&D partners (Virent, Gevo, and Avantium) to drive to a 100% biobased PlantBottle.TM  As you recall, the Plant BottleTM used bio-based ethyleye glycol (EG) to make PET.  The next piece of the puzzle is to find a synthetic route to bio-based terephthalic acid (PTA). The Virent approach uses soluble carbohydrate starting materials and the Gevo approach uses fermentable sugars to produce bio-terephthalic acid (bio-PTA).  The Avantium YXY approach uses C6 sugars to produce furanics, then furandicarboxylic acid , which when polymerized with bio-EG will form bio PEF, a totally new, 100% biobased polymer.  YXY is a trademark of Avantium (www.avantium.com) of the Netherlands.  The following figure provides a graphical summary: 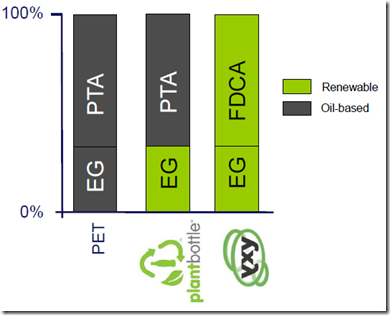 This post will focus on the Avantium approach to a fully bio-based polyethylene furanoate (PEF).  Avantium has discovered and patented a revolutionary chemical, catalytic process that allows for the economic production of furanics based on a wide range of carbohydrates.  The YXY process converts biomass from various sources into the building blocks of alkoxy-methyfurfural (RMF) using a dehydration process in the presence of alcohols (R-OH) and catalysts: 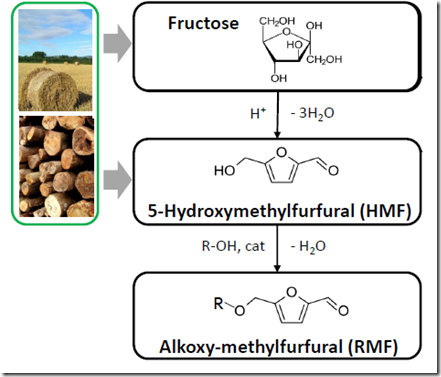 The process then converts the alkoxy-methylfurfural (RMF) to furandicarboxylic acid (FDCA) via an oxidation process: 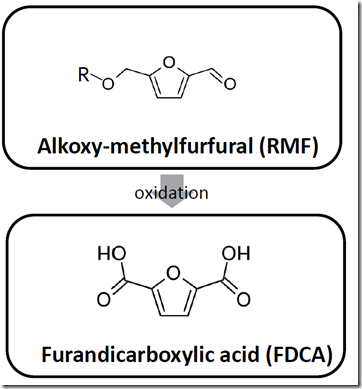 The overall process can be summarized as follows:

Furandicarboxylic acid FDCA is polymerized in the presence of ethylene glycol (EG) forming polyethylene furanoate (PEF) yielding a high performance engineering thermoplastic capable of multiple applications.  The difference in PET and PEF can be seen in the following graphic: 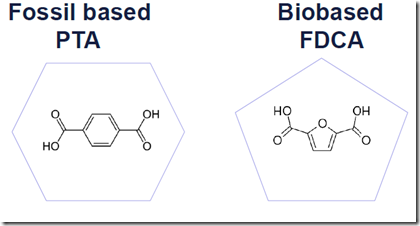 The Avantium product line called YXY PEF can be used to produce: 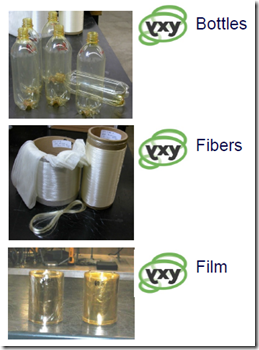 Another driving force behind PEF is not only the potential to have a high performance polymer made from 100 renewable sources, but PEF will compete on performance.  Specifically PEF has very good barrier properties (hard to achieve with most bio-based polymers)

So one might ask, sounds good but what about recycling? PEF can be recycled and incorporated into the PET recycle streams at up to 5% PEF with no affect on the recycled PET performance.

1) Images from “Latest Advancements in Biobased Materials and Partnerships; YXY Green from Within, by Peter Magnus, Avantium; presented at the Bioplastics Conference in San Francisco, June 2012.