Whenever I think of polyester, I am reminded of an old Steve Martin joke directed at the tacky clothes worn by band member Tommy Newsom during the Tonight Show: “Do you know how many polyesters had to die to make that suit?” There is actually some truth to this bit of levity when one is considering polyhydroxyalkanoates (PHAs), since the microorganisms that produce these renewable, biodegradable polyesters1 are sacrificed during the PHA harvesting process. Microorganisms such as Ralstonia eutropha and recombinant Escherichia coli produce PHAs as energy storage materials deposited in granules or inclusions that can make up as much as 70-90% of the cell dry weight (see Figure 1)2. These microorganisms can be thought of as tiny factories that convert renewable food sources such cane sugar and dextrose (glucose) from corn starch into bio-plastic. PHA isolation usually involves extraction using solvents3. 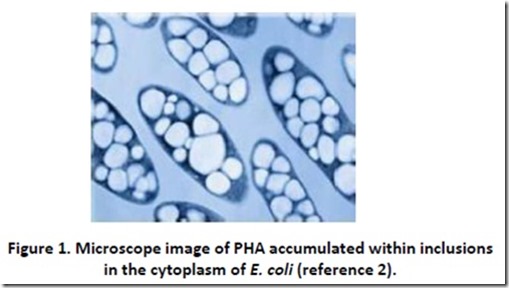 Direct microbial synthesis of PHAs makes them unique since all other renewable polyester polymers must be prepared by chemical polymerization methods from the appropriate, fermentation-derived monomers4.

Figure 2 shows the structures of the hydroxyacids found in PHAs that have been commercialized. The top two structures, 3-hydroxybutyrate (3HBA) and 3-hydroxyvalerate (3HVA), are the monomers most commonly found in commercially available PHAs, although over 100 naturally occurring monomers are known. 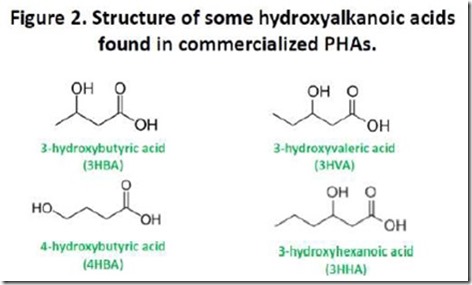 If we use poly(3-hydroxybutyrate), or P3HB, as an example, biosynthesis involves formation of 3-hydroxybutyryl-CoA followed by polymerization catalyzed by the enzyme PHB synthase (Figure 3). PHAs produced microbially can have molecular weights of 500,000 to over 1,000,000 5, much higher than is achievable by conventional condensation polymerization starting from hydroxyacid monomers. PHAs are typical of Nature’s ability to make very high molecular weight condensation polymers, including proteins, starch, cellulose, and nucleic acids. 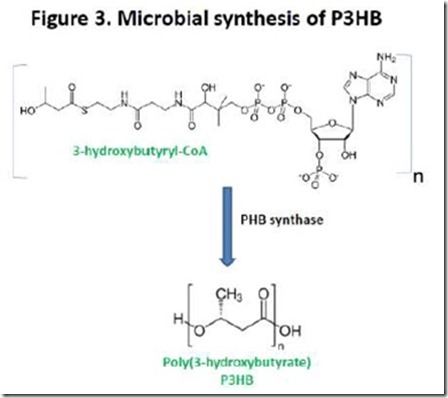 PHAs are highly crystalline polymers, a consequence of the stereochemical purity of microbial hydroxyalkanoyl-CoA monomers that are enzymatically polymerized6. For example, microbial P3HB is more correctly viewed as poly[(R)-3-hydroxybutyryte], generated by enzymatic polymerization of (R)-3-hydroxybutyrl-CoA. P3HB has a crystalline melting point (Tm) of 1790C and a degree of crystallinity that can approach 80%. The Tm is only slightly lower than the polymer thermal decomposition point, which makes P3HB somewhat difficult to process7. P3HB is brittle and has excellent gas barrier properties, both a consequence of the high degree of crystallinity of this polymer. Improved flexibility and lower Tm (= expansion of the processing window) can be achieved by incorporation of a second hydroxyacid monomer, such as 3-HVA, as demonstrated by selected data in Table 18. Better impact strength and substantially improved elongation at break are also exhibited by P(3HB-co-3HV) and copolymers of 3HBA with other hydroxyacids. Properties of some PHA copolymers are comparable to those of low density polyethylene (LDPE) 9 with the potential advantage that PHAs are completely biodegradable via composting10. As with other thermoplastics, properties of P3HB and other PHAs can be improved significantly through formulating and compounding.

P3HB and other PHAs have been commercialized by a number of companies under various trade names, with Biogreen®, Mirel®, Biocycle®, Nodax™ and Biopol® being some examples. Lists of producers and capacities can be found in references 1a, 1c, and 1d. A number of producers have production capacity of ≥10,000 tons/year and construction of a facility with much larger capacity was announced late last year11.

Some applications of PHAs are shown in Figure 412. While PHAs have many potential applications that currently employ petroleum-based plastics such as polypropylene and polyethylene, food and consumer product packaging and agricultural applications have received the most attention because PHAs are both renewable and biodegradable when composted.

Finally, fairness requires that I mention polycaprolactone (PCL), a commercially available polyhydroxyacid that is petroleum-based and, therefore, does not fit the definition we employ for “bio-plastic”. PCL is prepared by ring-opening polymerization of caprolactone (CL), which in turn is prepared from cyclohexanone (Figure 5). PCL is biodegradable by composting and is manufactured by major petrochemical companies13. PCLs have many applications, including polyurethanes, molded plastics, biodegradable packaging, adhesives, and coatings. The chemistry of PCLs has been reviewed recently13c. PCL reminds us that biodegradable polymers can be prepared from petrochemical as well as biological sources.

The next post in the series will cover polyester furanoate (PEF) a new fully bio-based polymer that has improved properties compared with PET.