I don’t buy “organic” foods except on the rare occasion that I can find them at price parity with the “not organic” version. I admit that organic vegetables and fruits tend to be more attractive in appearance, at least on the store shelf. People I know who are devotees swear that they taste better and for them, that is enough to justify paying more. But basically, I’m cheap so the choice for me is an easy one.

Aliphatic Poly(alkylenedicarboxylate) polyesters (APDs) also can be “organic” or “not organic”, or more correctly, biomass-derived (i.e. renewable = “organic”) or petroleum-derived (i.e. not renewable) or a mixture of both. The material and application-related properties of a given APD should be the same whether bio-derived or petroleum-derived1, so it should be possible to make them technologically indistinguishable irrespective of source. The choice of which version to use will most likely be driven primarily by economics, although for some applications, being renewable may be enough of an advantage in the market place for a customer to be willing to pay more temporarily.

Common dicarboxylic and diol monomers found in APDs are shown in Figure 1. They include succinic acid (SA), adipic acid (AA), ethylene glycol (EG) and 1,4-butanediol (1,4-BD). The dicarboxylic acids and diols are coupled in various combinations to form polyester polymers via condensation polymerization with the elimination of a molecule of water for each ester bond formed.

A simplified example of such a condensation polymerization is illustrated in Figure 2 leading to formation of poly(ethylene glycol succinate), or PES. The first step of the reaction produces monoethylene glycol succinate, and is shown in Figure 2 for those who are not familiar with the chemistry involved in ester bond formation. The ester-forming reaction requires a catalyst2 and removal of the water and, therefore, is performed at elevated temperature and under vacuum to ensure that a polymer with adequate molecular weight is formed. Still, it can be challenging to drive the polymerization to high enough molecular weight to ensure that the polymer properties are acceptable for many applications. The molecular weight of hydroxyl-terminated APDs can be increased significantly by addition of coupling agents that react specifically with hydroxyl groups, such as diisocyanates3. 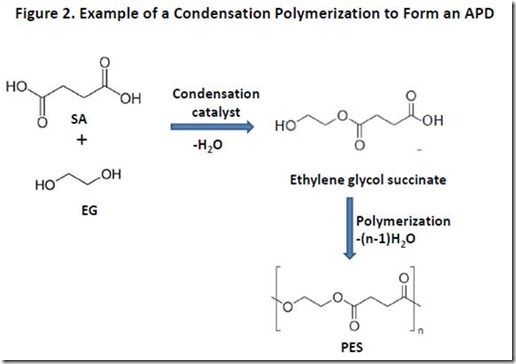 Petroleum-based and bio-based routes to APD monomers are summarized in Figure 4. 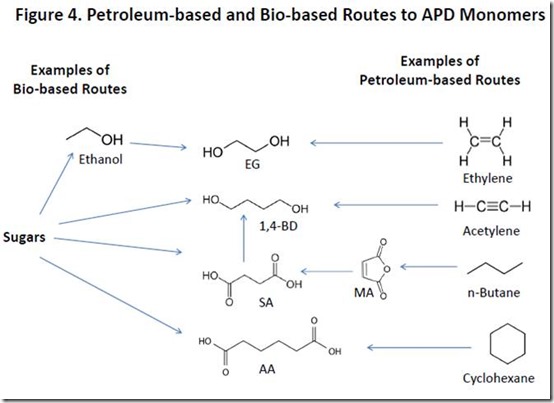 Aliphatic poly(alkylenedicarboxylates) have a large number of commercial and potential applications, including: polyols used in polyurethanes for coatings, adhesives and foams; flexible packaging; agricultural films; compostable bags; and in blends and composites with other bio-based polymers to enhance properties10. APDs have been commercialized under various trade names, with Bionolle® and EnPol® being examples. Some of the properties of one commercial version of PBS are shown in Table 111.

1. Assuming that the same level of purity can be attained with the bio-based versions of the monomers. It is noted here that the level of 14C in the bio-derived APD monomers will be different from that in the petroleum-based monomer, but this very small but measurable difference will have no impact on application properties.

9. For example, see: a) http://www.ihs.com/products/chemical/technology/pep/bio-based-adipic-acid.aspx