In our last post we discussed the growing market for biobased polymers and bioplastics (biopolymers compounded with additives to improve properties).  In this post we will discuss the increasing use of polylactic acid (PLA) in a variety of applications.

PLA is a semi crystalline thermoplastic polymer and the properties depend on the type of lactide used in the  polymerization.  Due to the chiral nature of lactic acid, several distinct forms of polylactide exist: poly-L-lactide (PLLA) is the product resulting from polymerization of L,L-lactide (also known as L-lactide). There is also poly-D-lactide (PDLA) formed when the D isomer is used.  PLLA has a crystallinity of around 37%, a glass transition temperature between 60-65 °C, and a melting temperature between 173-178 °C (1,2).  In the several posts we will provide a more detailed explanation of the chemistry and how renewable raw materials are used as the starting materials.

If you recall in the post on 7/23/2012 we discussed the use of a PLA cold beverage cup that was labeled as compostable.  We took that same cup and used DSC to look at the Tg and melting behavior.  The following experiment was conducted.

The following DSC curves were obtained: 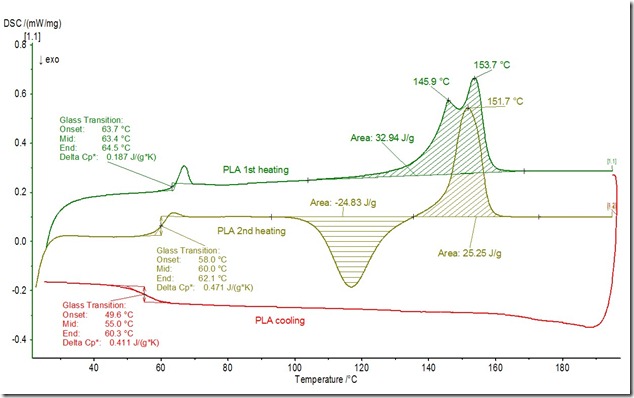 During the first heating (green curve above) the Tg is very clear (along with an enthalpy relaxation peak with the Tg midpoint at 63°C.  As the temperature continued to rise, a complex melting endotherm is visible with at least two distinct melting events observed.  During cooling (red curve) there is no evidence of crystallization and the Tg is observed around 55°C.  The second heating has several classic features of a semi crystalline polymer.  On heating (gold curve), the glass transition is observed at 60°C and then cold crystallization can be seen as an exothermic peak starting at approximately 100°C.  Remember glass transitions are endothermic (heat into the sample, thus upward baseline deflection in the above curve), crystallization is exothermic (heat evolved, thus peak down in the above plot), and melting is endothermic (heat into the sample, thus peak up in the above plot).  Semi crystalline polymers contain both amorphous and crystalline domains, and the DSC analysis of our compostable PLA cup exhibited both the glass transition temperature from the amorphous fraction and a crystalline melting peak arising from the crystalline domains.

Since PLA has properties typical of semi crystalline thermoplastic polymers, they can be used in a wide variety of applications.  The following graphic shows some of the current uses for PLA. 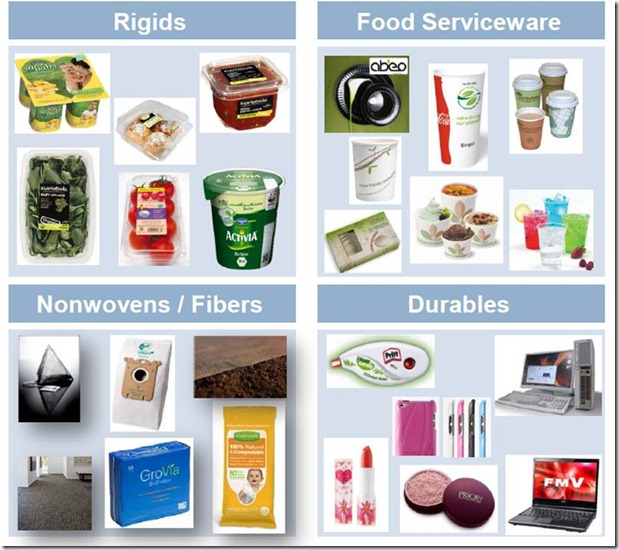 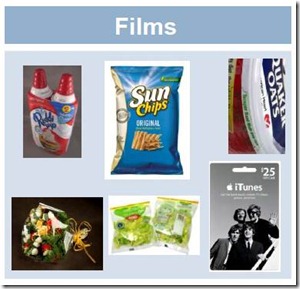 In the next post Dr. Robert Humphreys will provide more details on the polymerization mechanisms for polylactic acid polymers.

Share on LinkedIn Share
« Bioplastics: What is the Market Size?
From Corn to Poly Lactic Acid (PLA): Fermentation in Action »