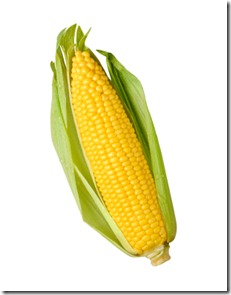 In previous posts, Dr. Gotro discussed the growing list of applications for polylactic acid (PLA) and some of the properties that have allowed this 100% renewable, biodegradable polymer to penetrate a broad range of markets that have been served traditionally by petroleum-derived polymers. In the next two posts, we will describe the process through which field corn is converted to PLA, providing a reliable, commercial supply of this polymer that is so necessary for application engineers to give it serious consideration as a new material. First, we will focus on conversion of corn to L-lactic acid, followed by conversion of L-lactic acid to PLA in the next post.

Conversion of Corn to Dextrose

Corn must first be converted to corn sugar (dextrose, the common commercial name for D-glucose) through a process that begins with wet milling, a mechanical process in water that separates starch, as well as other valuable components, from the corn kernel. The starch is then heated with acid or enzymes, or both, to completely hydrolyze the starch to dextrose. The dextrose is isolated by crystallization or used as a liquid concentrate. The process is shown in the first figure. A typical starch wet milling plant can process 100,000 bushels of corn a day!

Conversion of Dextrose to L-Lactic Acid

Glycolysis is the first energy-yielding step in metabolism of D-glucose by plants, animals and many microorganisms. The process converts glucose into two molecules of pyruvate, along with two molecules of ATP and two of NADH. Pyruvate is slightly more oxidized than glucose, and the hydrogen lost from glucose during the oxidation transforms NAD+ to NADH. ATP is, of course, the “universal energy currency” for all life on earth. The overall process is illustrated in the following figure. 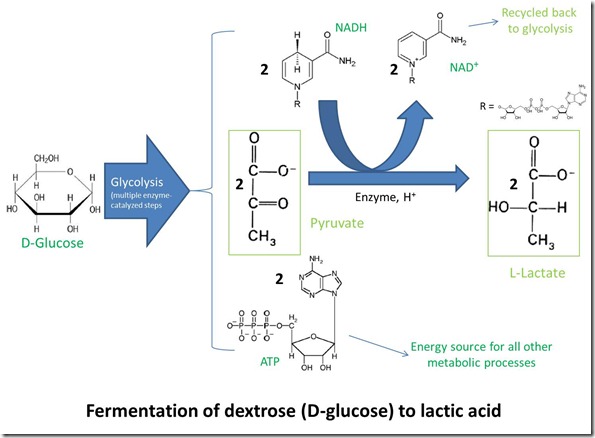 Pyruvate can be metabolized further in several ways depending on the organism and environment. When oxygen is available, animals, plants and some microorganisms oxidize pyruvate completely to CO2 through a process known as respiration. On the other hand, in an anaerobic environment where oxygen is not available, pyruvate can suffer one of two fates:

– Reduction to lactate (the conjugate base form of lactic acid), with the hydrogen supplied by oxidation of NADH back to NAD+. This route is favored by some microorganisms and also occurs in animal muscle tissue during vigorous exercise, when oxygen transport can’t keep up with demand.

– Conversion to ethanol by decarboxylation to acetaldehyde and reduction of acetaldehyde by NADH. Microorganisms such as yeast prefer this route, which readers will recognize as the technology that supports the beer, wine, liquors and biofuels industries.

The energy yielding process that involves either of these two conversions is known as fermentation, which is the biochemical extraction of energy in the form of ATP from carbohydrates such as glucose in the absence of oxygen. For many microorganisms, fermentation is the principal energy producing process.

The next post will focus on the process for converting lactic acid to PLA.