In the last two blog posts we looked at amines as curing agents for epoxies, and one downside of amines is that they can take up to a couple of hours to cure at ambient temperature depending on the structure, with the fastest amines still only curing in 30 minutes to an hour.  What if you wanted to develop an adhesive or coating that cured in minutes, or possibly even under a minute?  That is where mercaptans come into the picture as curing agents for epoxies.  Mercaptans cure epoxies through an active hydrogen on a sulfur group (S-H), and typical mercaptan curing agents that are sold commercially have multiple S-H groups available for curing.  A representative structure of a commercial polymercaptan curing agent is shown in Figure 1. 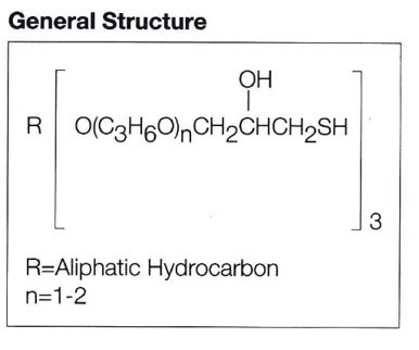 Polymercaptans by themselves do not cure epoxies though, and require the use of an accelerator, which is typically a tertiary amine such as 2,4,6-tris(dimethylaminomethyl)phenol (DMP-30), benzyl dimtheylamine (BDMA), polyamidoamines and ethyleneamines.  Figure 2 shows the effect of increasing catalyst concentration on the cure time of a polymercaptan with a standard bisphenol A based epoxy resin.  One hundred parts of epoxy were mixed with 100 parts of polymercaptan and either 5, 7.5 or 10 parts of DMP-30.  At 10 parts of DMP-30, hardness development was rapid, on the matter of minutes, with 7.5 parts DMP-30 giving similar gel times but not as high of ultimate hardness.  At 5 parts of DMP-30, gel was slow and ultimate hardness was low compared to the higher concentrations. 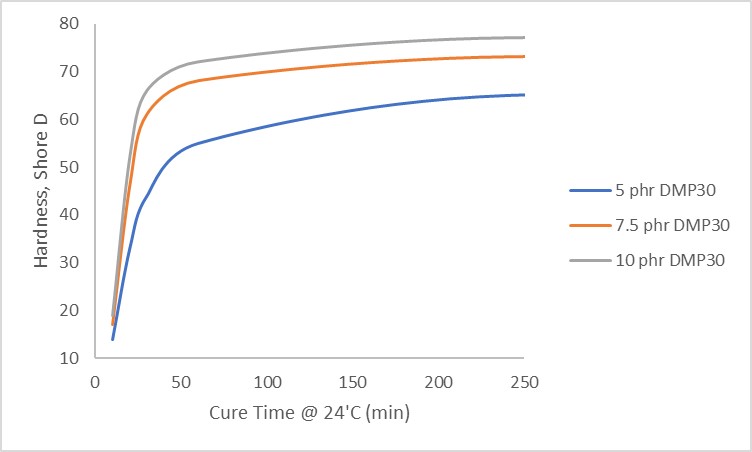 In addition to the gel time being tunable by the amount of catalyst that is added, mercaptans have other advantages that make them extremely useful curing agents for epoxy resins, and the main highlight are listed below:

Not only are mercaptans easy to formulate because of the 1:1 mix ratio with bisphenol A epoxy, they are very forgiving in their stoichiometry.  They are so forgiving in fact that the mix ratio can be off by up to as much as +/- 25% and not have this affect the properties.  Figure 3 shows the cure time of 100 parts of a bisphenol A epoxy mixed with varying parts of mercaptan and 10 parts of DMP-30.  It is only at 0 parts and 150 parts of mercaptan that the properties differ significantly. 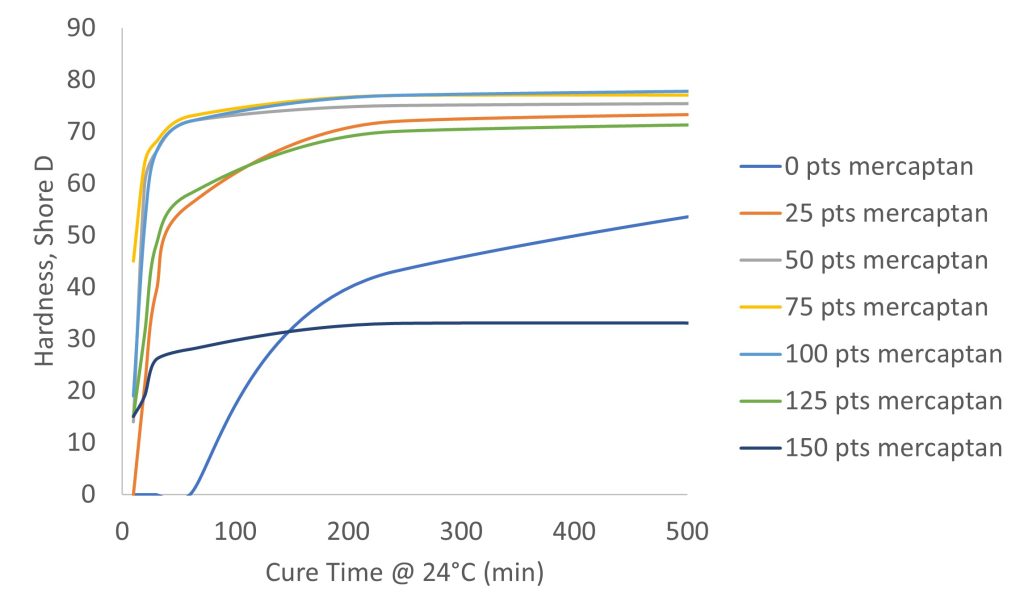 One of the down sides of polymercaptan curing agents though is their relatively low Tg when cured with bisphenol A epoxy, giving a Tg only slightly above room temperature.  This can be overcome though by the formulator using a multifunctional epoxy or epoxy novolac, where Tg’s of 50 to 60°C are easily achievable with a room temperature cure, which significantly improves the temperature resistance.

No blog post on mercaptans would be complete without mentioning the odor of mercaptans.  Because of the sulfur groups present in the molecule, mercaptans have a characteristic sulfur-based odor.  Suppliers of mercaptan will often add masking agents, which when combined with the mercaptan give an odor profile that most users find less objectionable.

Overall, it is easy to see why mercaptans are so well suited for DIY and consumer applications – fast gel times, forgiving stoichiometry, 1:1 mix ratios, good performance at low temperature, ability to bond different substrates and relatively low toxicity.  Mercaptans do have their downside though, with low chemical, thermal and water resistance, which limits their use in some structural applications.  In the next blog post we will look at the other end of the performance spectrum with anhydrides, which can give extremely long pot life and very high thermal and chemical resistance.