In the previous post, we gave a brief overview of the preliminary stage of sorting of municipal solid waste (MSW) to separate a fraction that is similar in composition to single-stream recyclable waste that municipalities collect at curbside. Further sorting of this recyclable waste can occur at the mixed waste recovery facility (MWRF) or at a separate material recovery facility (MRF). In either case, the separation process is similar.

For the sake of simplicity, we will assume that plastic film, including laminates, and larger or more complicated items, such as pails, laundry baskets, and toys, as well as large metal items such as buckets were separated at the previous stage or upon arrival at the MRF via a manual process, usually on a large conveyor belt.

Sorting of glass and metal containers

A large variety of glass containers, including bottles and jars, can be found in most MSW and single-stream recycled waste. Glass is separated from plastic and metals by crushing; glass pieces fall through a screen for further separation by optical sorters which can separate glass “cullet” by color (clear, green, brown).

Most metal food containers consist of steel cans and aluminum beer and soft drink cans. Both steel and aluminum containers are separated magnetically, steel by magnetic attraction and aluminum and any other non-ferrous metals (e.g. copper) by magnetic induction (known as “eddy current” separation). Steel containers “stick” to a rotating magnet while nonferrous metals and plastics bypass the magnet. At a different site, where a specially designed magnetic device (a rapidly rotating electromagnet in a drum or pulley) induces a magnetic field in the conductive but nonferrous metal container (e.g. aluminum) that repels the container off of the end of conveyor; the nonferrous metals are repelled beyond a splitter bar while plastics and other waste drop before the splitter bar and travel to the next separation site. 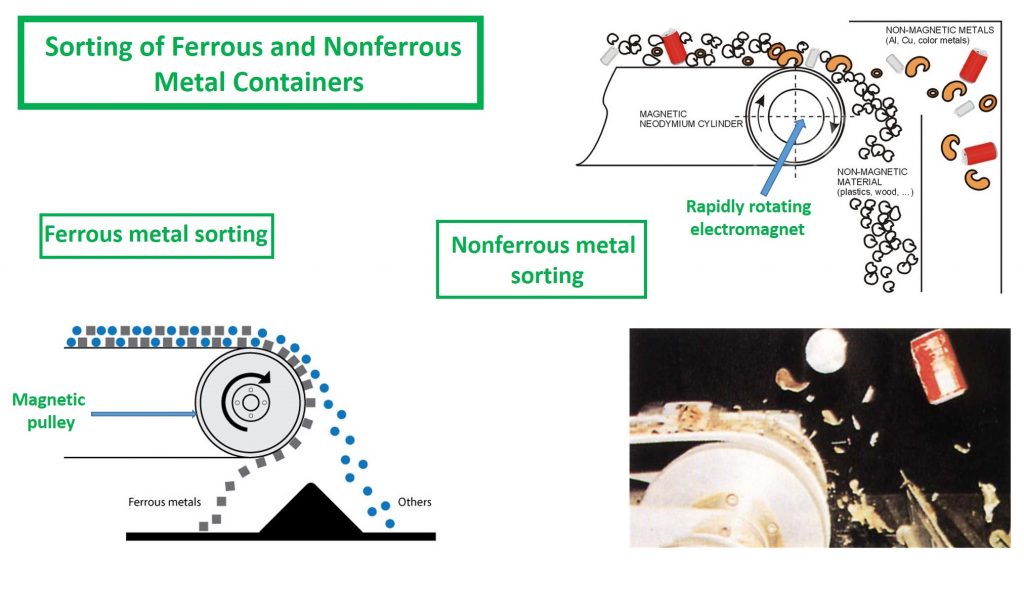 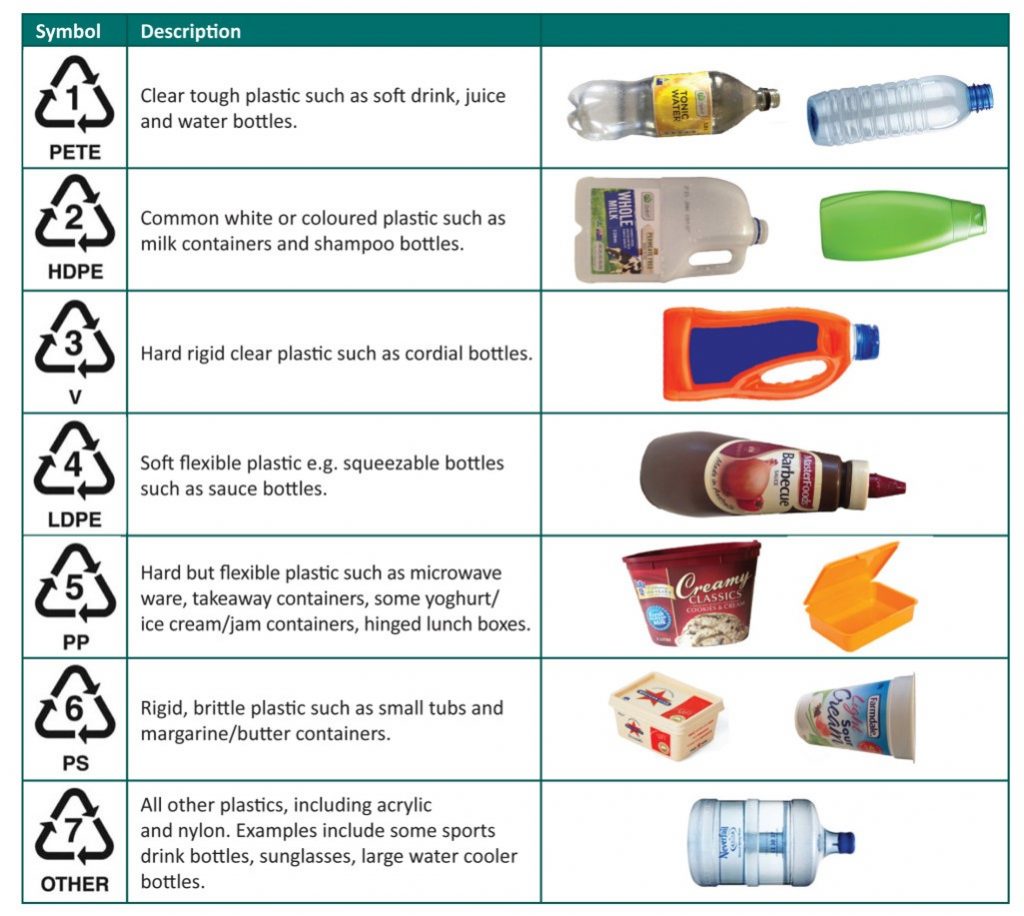 PET and HDPE have the highest value in recycled plastic markets (reference 2, 3), so it is not surprising to find that these are the two plastics that are the focus of most plastic sorting systems. However, plastic sorting equipment has the ability to distinguish and separate plastics #1-7, although #7 is complicated because it is essentially the “all other” category and lower volume plastics (e.g. ABS, acrylonitrile-butadiene-styrene) and new market entries (e.g. PLA, polylactic acid). Analogous to glass sorting, plastic sorting equipment also can separate plastics by color, although apparently this is not common practice.

Plastic sorting is performed by specialized equipment that consists of two important components:

The sensing system is typically a near-infrared (NIR) optical imaging system that can pinpoint plastics on a conveyor belt. NIR radiation from a source along the conveyor penetrates plastic objects as they move by and a sensor measures the response of the plastic to the NIR radiation. Each type of plastic (recycle #1-7) will give a unique response to the NIR radiation, which can be thought of as a fingerprint of that type of plastic. The imaging system notes the position of the particular plastic on the belt and when the plastic reaches a collection point, a spritz of air from a nozzle ejects the plastic from the belt into the appropriate collection bin. Although it sounds relatively simple, such a system became practical because of recent advances in NIR imaging technology. 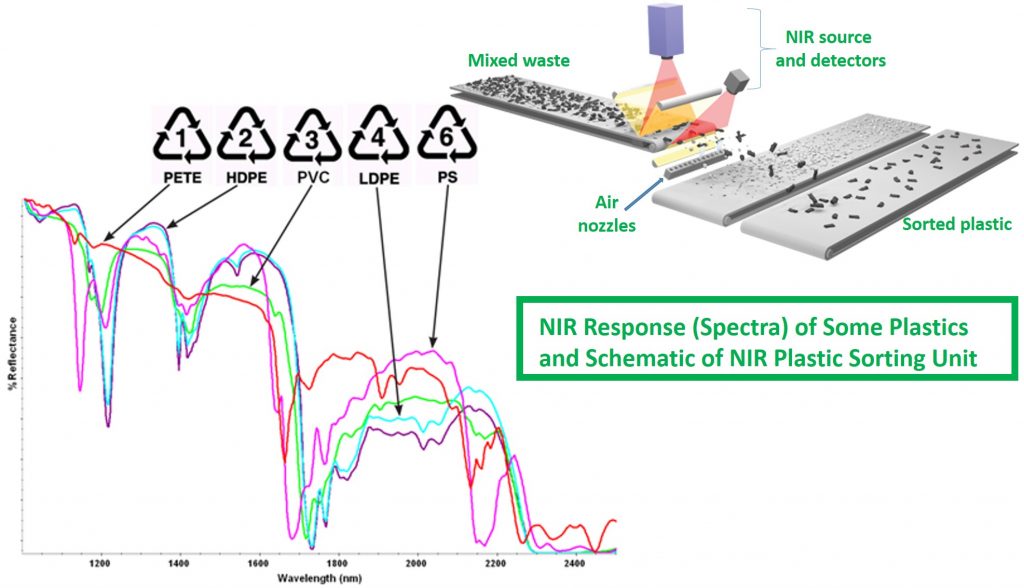 We should mention that X-ray is second type of sensing system also in use for plastic sorting (reference 4). X-ray fluorescence imaging is particularly effective for distinguishing PVC containers because PVC contains the element chlorine, which gives a unique X-ray fluorescence response. X-ray systems involve high energy and require effective shielding to protect workers; hence NIR is the preferred system.

As already mentioned above, sorting of plastics by color (e.g. green, blue, clear) also is possible using optical detection systems (see reference 4 and 5). Based on information available to the author, such sorting is not performed in the USA currently.

In this and the previous post, we have attempted to give the reader a flavor of the way engineering technology has been used to address a seemingly intractable problem like sorting of municipal waste to generate a (potentially) valuable resource such as post-consumer plastics and metals. Of course, there are possible uses for other streams sorted from MSW, including energy generation and compost production. We gave an overview of compost production in posts 2-6 of this series and will consider energy generation in future posts. In the meantime, we will conclude this series of posts on plastic sorting with a short overview of the challenges faced by any organization involved in sorting and recycling of MSW. After all, the nature of MSW is necessarily dynamic because it is affected by local and global economics, municipal budgets and continual evolution of both consumer habits and scientific and engineering technologies; any organization that is responsible for MSW disposition must be able to respond effectively to such a dynamic environment.