One of the largest drivers of new product development for thermosets, and in particular epoxies, is sustainability, and the curing agents for epoxies are no exception.  Today there are a variety of biobased curing agents for epoxy resins, and perhaps the most widely known and utilized are the phenalkamine family of amine-based epoxy curing agents.  Phenalkamine curing agents are based on cashew nutshell liquid, from which cardanol is extracted.  Cardanol is then reacted with various amines to give a phenalkamine, which is a type of Mannich Base, with the reaction scheme and structure shown in Figure 1. 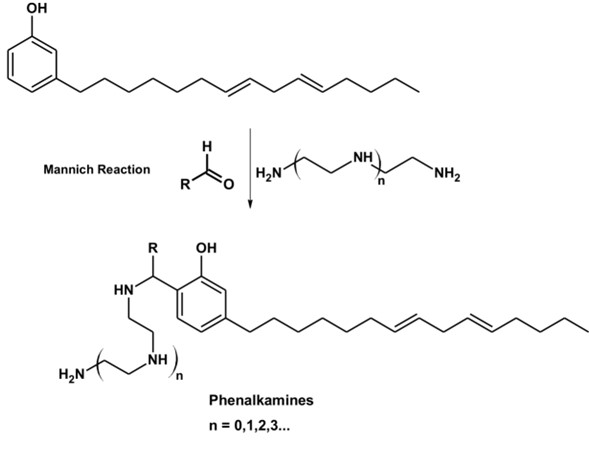 Because of their unique structure amongst amine curing agents, phenalkamines offer the following benefits:

In addition to commercially available phenalkamines and phenalkamides, there have been several other studies conducted on biobased raw materials to be used as curing agents for epoxy resins, and these studies are summarized in Table 1.

Of the bioderived curing agents listed in Table 1, the structures based on furanyl building blocks have many possibilities for fine tuning properties.  Some of the possible structures are shown in Figure 3.

When DFDA and CH3-DFDA were cured with a standard bis-A based epoxy resin, Tgs of 128°C and 142°C respectively were measured using DMA.  This demonstrates that there does not have to be a compromise in performance with a biobased curing agent and that high thermal resistance systems can be achieved.

This blog posts shows that there are an ever-increasing number of bioderived curing agents that are being developed that give exceptional properties.  The development and commercialization of these curing agents will continue to grow as the push for sustainability increases across multiple markets that use epoxy resins.  When used in combination with bioderived epoxies, a formulator can create a product that truly makes a difference to the consumer and the environment.