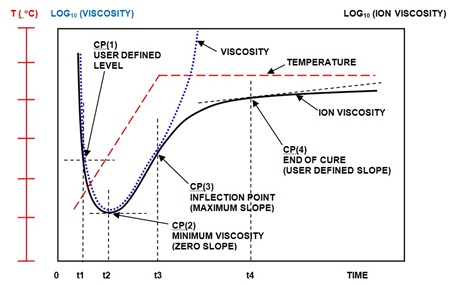 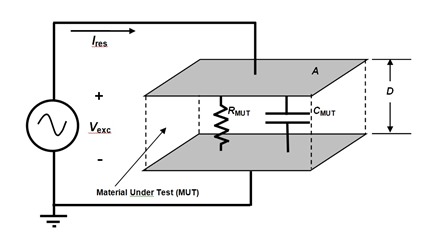 Simple parallel plate electrodes, shown in Figure 3, can measure the dielectric properties of material between the electrodes. The ratio of electrode area A and the distance D between them—the A/D ratio—is a figure of merit. A larger A/D ratio corresponds to greater sensor sensitivity. The A/D ratio is also the scaling factor for calculating resistivity from resistance, and permittivity from capacitance. Unfortunately, distance D can change with pressure, or with expansion and contraction of the material, causing inaccurate results.

Figure 4 shows a typical disposable dielectric/conductivity sensor with interdigitated electrodes 100 microns wide. Constructed as a Kapton® flex circuit, this sensor is thin enough to be inserted between the plys of a laminate and may be discarded after use. The narrow electrodes, too small to be visible in the figure, result in a large A/D = 160, with correspondingly great sensitivity. The trade-off is the measurement of dielectric properties only within 100 microns of the surface. 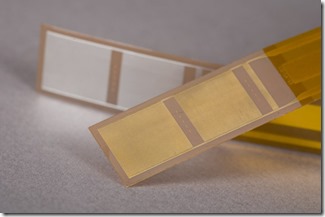 Figure 5 shows a reusable dielectric/conductivity sensor embedded in a platen for a small press. This sensor is constructed with interdigitated electrodes embedded in ceramic and has an A/D = 10. When mounted as shown, it is possible to place a sample in the press, then heat and compress it and simultaneously make dielectric measurements to monitor cure. Afterward the sample can be removed from the sensor and the process can be repeated.

Reusable sensors are convenient for applications such as Quality Assurance/Quality Control (QA/QC), which involve repetitive testing. Note the wider electrodes, visible in Figure 5. This sensor is able to measure more deeply into the material, with the trade off of decreased sensitivity because of the smaller A/D ratio. 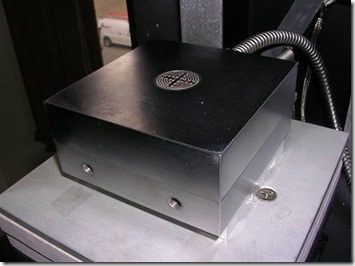 Dielectric/conductivity sensors have two general configurations, parallel plate or interdigitated electrodes. The selection of a sensor depends on the desired type of measurement, either surface or bulk, and the desired sensitivity as indicated by the A/D ratio.