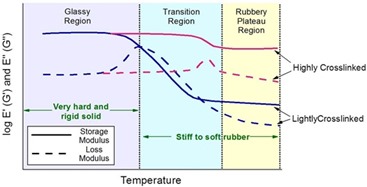 In this post we will present some additional examples of how DMA can be a useful tool for thermoset characterization.

In the following figure, a partially cured fiberglass reinforced prepreg was analyzed.  A prepreg is typically a woven fiberglass fabric that is impregnated with a thermoset resin and partially cured.  Since the material will soften during the DMA run, the ends of the sample were wrapped in aluminum foil to prevent the curing sample from sticking to the clamps. 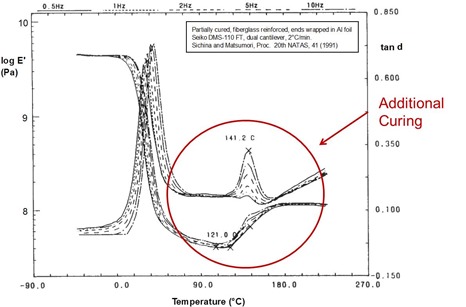 As Dr. Prime has presented before, once the sample run was completed in the DMA, you can run it again in either the DSC or a second DMA run to measure the Tg.  Remember the Tg is a very good indicator of the degree of cure in thermosets. 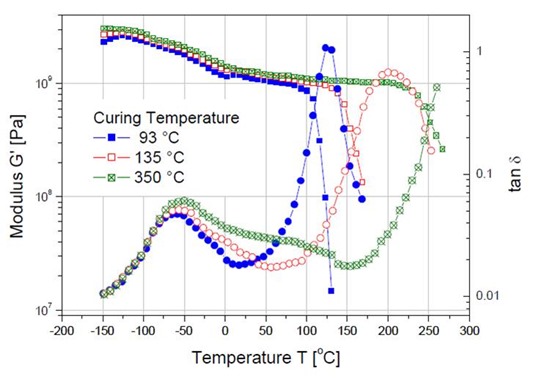 With higher curing temperatures, the second transition in the storage modulus progressively moves to higher temperatures (Tg increasing with cure temperature).  The tan delta peak also increases with curing temperature.  At the highest cure temperature (350oC), the storage modulus begins to decrease indicating the beginning of the glass transition range, but the DMA scan was not run to a high enough temperature to fully resolve the tan delta peak. Obviously this is a high Tg composite with some sort of phase separation occurring (presumably to toughen the high Tg matrix material).

Another example of the use of DMA is to characterize the role of moisture on a printed circuit board (PCB) laminate.  In the DMA scan below, the green curve is the “As received” laminate and the black curve is the “post baked” laminate. 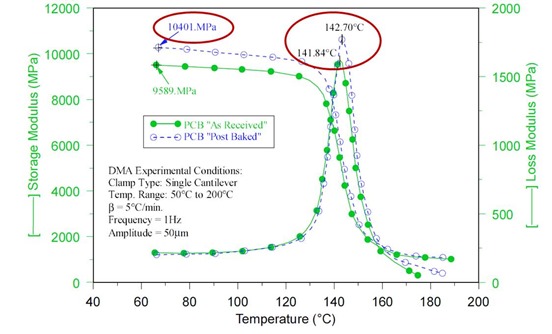 In this case, the post baking operation was used to dry the laminate and eliminate any absorbed moisture prior to processing in a circuit board process.  One observes the Tg is not significantly affected by the baking operation, but the modulus increases approximately 8% after baking.  The Tg values obtained from the tan delta peaks is likely within experimental error.  Note that the shape of the DMA curves are not changed, but the value of the modulus in the glassy region is reduced by the abosrbed moisture.  It is well known that absorbed water plasticizes epoxy resins and decreases the modulus and in some cases (but not in this case) decreases the Tg.

In summary, DMA can be used in a variety of different ways to investigate the curing and final physical properties of cured thermosets.  This post concludes our series on thermoset characterization.

In our next post, I will start another series dealing with the rheology of thermosetting polymers.  This will include both liquid rheology of uncured thermosets (dispensing and mold filling) along with using rheology to follow the curing process (chemorheology).  We will highlight various rheological methods and dielectric spectroscopy as a cure monitor.