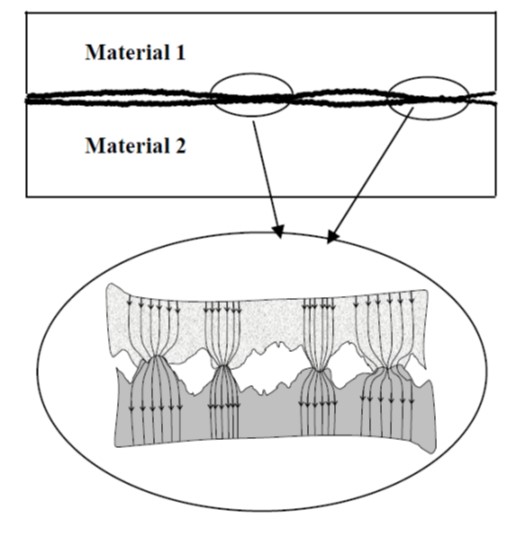 In reality, no surface is perfectly smooth and actual surfaces typically have surface roughness as shown in Figure 1.  When the two surfaces are placed in contact, the contact area is defined where the high points on each surface touch as seen in the lower part in Figure 1. The point-to-point contacts are where the heat transfer occurs across the interface.  The heat flow paths are shown schematically in the lower part of Figure 1. Good heat transfer requires intimate contact between the two surfaces.  Note that between the point-to-point contacts are air gaps.  Air is a poor thermal conductor, so the higher the surface roughness, the lower the overall heat transfer will be.

Thermal interface materials are utilized to eliminate or minimize the air gaps between the two surfaces.  In Figure 2, an idealized cross-section is shown depicting the placement of a TIM between two objects. Note there are three regions in the TIM that is in the gap between the two objects; the first is the bulk of the TIM (grey area) and the second is the interfacial layers on both sides of the TIM.  The combination of the interfacial resistance and the TIM thermal resistance is termed the “thermal contact resistance” in Figure 2. 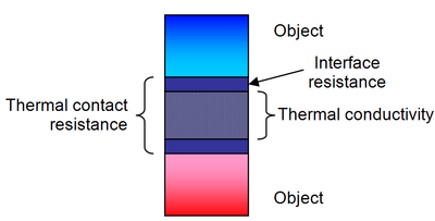 As discussed above, actual surfaces are not flat and have some degree of surface roughness [1].  The effective total thermal resistance between the two objects consists of:

Figure 3 shows a schematic of a thermal interface material inserted between the two objects. 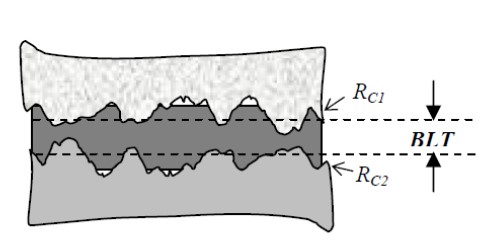 In Figure 3, BLT is the bond line thickness and Rc1 and Rc2 are the contact resistances of the TIM at the two surfaces.

The effective total thermal resistance is expressed as [2]:

Reffective is the total thermal resistance

A is the cross-sectional area

BLT is the bond line thickness

The contact resistance is controlled by a number of factors such as surface roughness, clamping pressure, the TIM compressive modulus, surface energy (for wetting) and the TIM rheological properties [1].  One can see that flow, wetting, and surface chemistry may play important roles in decreasing the contact resistance.