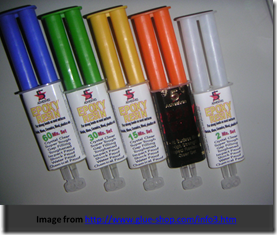 Readers who perform DIY repairs and projects around their homes will readily recognize a two-part epoxy adhesive dispenser. Epoxies are thermoset polymers that cure (crosslink) when a di- or multi-functional epoxy monomer reacts with a hardener. Many types of hardeners are used, depending on the desired properties of the cured epoxy, the cure conditions and the required set speed1. Cured epoxies are renowned for their strength and durability. Applications include paints and coatings, structural adhesives, electrics (potting, die attach, insulators, circuit boards), and fiber reinforced plastics (FRP). Resin volume used in some applications can be huge: carbon fiber reinforced epoxy FRP can comprise up to 50% of the structural weight of a state-of-the-art, fuel-efficient airliner2! 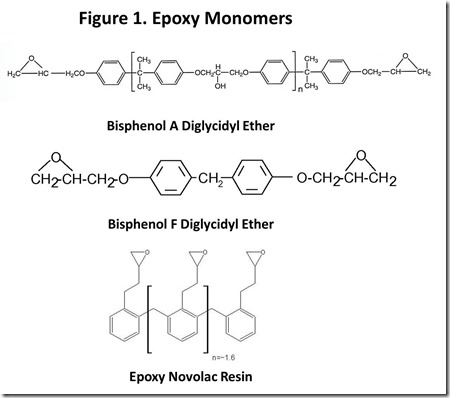 Chemical structures of typical epoxy monomers are illustrated in Figure 13, with bisphenol A diglycidyl ether being the “workhorse” epoxy monomer. Other common monomers include bisphenol F diglycidyl ether and epoxy phenol Novolac resins. Cross-linking of thermoset epoxy resins involves a chemical reaction at the epoxy groups. From the early days of epoxy resin technology4, the source of epoxy groups has been epichlorohydrin, shown in Figure 2. “Epi”5 reacts with the phenolic oxygen, usually in the presence of added base, with displacement of chloride ion to attach the glycidyl group to phenolic oxygen. Epi is a nasty material6, so great care must be used in handling it and ensuring that it is completely reacted in the epoxy resin. Obviously, if renewable epoxy technology is to become a reality, a commercially practical route to renewable epi is mandatory.

Today, epichlorohydrin is produced petrochemically, as shown in Figure 37, and involves chlorination of propene to give allyl chloride, followed by addition of hypochlorite to the carbon-carbon double bond and base-catalyzed ring formation to give epichlorohydrin. More recently, a route to renewable epi has become commercially practical because of the growth of bio-diesel fuel based on seed oils. Bio-diesel production generates huge amounts of glycerol, to the point where a glycerol market glut has developed8, with the expected effect on glycerol market price. This is one of the best examples to date of the potential economic impact of biofuels development on the chemical market. Glycerol can be converted into epichlorohydrin via the same intermediates that are generated in the petrochemical route to epichlorohydrin, as can be seen by comparing the glycerol and propene routes to epichlorohydrin in Figure 37. This year, several major chemical producers announced plans to commercialize a glycerol-to-epichlorohydrin process9. 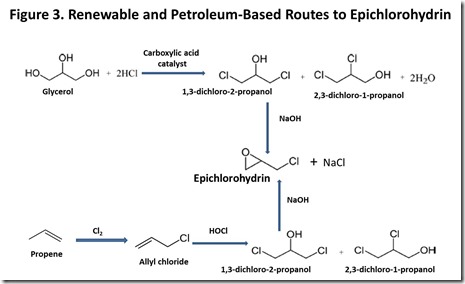 Renewable phenol, acetone, formaldehyde, and epichlorohydrin can be substituted for the petrochemical equivalents to produce renewable bisphenol A diglycidyl ether, bisphenol F diglycidyl ether and epoxy Novolac resins, the key raw materials for renewable epoxy resins. Potential sources of renewable phenol and formaldehyde were discussed in recent posts to this blog10. Acetone was produced commercially in the early part of the 20th century, before the development of the petrochemical industry, from renewable sources by fermentation using the “ABE” (Acetone-Butanol-Ethanol) process11. Thus, all of the key raw materials for the most important epoxy monomers can be made from renewable sources. With an estimated, annual global volume of over 3 million tons by 201712, renewable sources of high volume epoxies could make a significant contribution to the drive for more sustainable polymeric materials.

In several future posts, we will discuss development and supply of second generation biomass feedstock, which is perhaps the most challenging aspect of the replacement of petroleum as the dominant source of energy, chemicals and polymeric materials.

5. Note that the “epi” acronym can refer to epinephrine as well as epichlorohydrin.

Share on LinkedIn Share
« 3D Printing of Medical Implants Is on the Way
Did Six Sigma Really Kill Innovation at 3M? »