In the last post we talked about isothermal cure rheology.  This is a good way to look at the curing time, gelation time, and get an understanding of the viscosity temperature dependence, but most commercial thermoset processing methods are non-isothermal.  Whether it is bulk molding compound (BMC) molding, prepreg lamination for composites, or integrated circuit encapsulation with a mold compound (image on right), the temperature profile typically consists of an initial heating ramp and subsequent hold at the cure temperature.

The figure below shows a typical molding configuration with the pellets in the center, the runners out to the ten leadframes, and the fully encapsulated parts.

A schematic of the rheology profile is shown in the following figure: 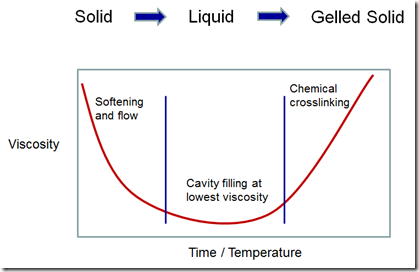 The various mold compound manufacturers tailor the formulations to achieve various flow amounts during encapsulation. The chemical crosslinking reaction is tailored to control both the flow time (i.e. time to the gel point) and the final material properties such as the fully cured Tg, modulus, moisture absorption, etc.

Let’s turn our focus back to characterizing the rheological properties during a non-isothermal cure.  In the following figure, the dynamic moduli (G’ and G”) are plotted as a function of time for a linear heating ramp to the isothermal cure temperature.  The complex viscosity can be calculated from the dynamic moduli using the following relationships:

During the curing reaction, one observes as the B-staged epoxy resin softens on going through Tg, the viscous component (G”) dominates.  During the subsequent heating, the viscosity drops and at the minimum viscosity, the viscous component is the main contributor (and the elastic component, G’) is approximately an order of magnitude lower.  The chemical curing reaction causes chain extension initially followed by crosslinking leading to gelation.  In the figure below, one observes the dynamic moduli crossover at 134.5oC. For most curing systems, the dynamic moduli crossover point is a good estimation of the gel point.  After gelation, one observes the viscous component is less than the elastic component.  In this case the curing temperature was 175oC and the final fully cured Tg for the epoxy was 130oC, so at the final cure temperature, the resin was in the rubbery phase and therefore should have a large elastic component.  Additionally, the data was obtained using small amplitude oscillatory parallel plates, enabling rheological measurements throughout the curing process. 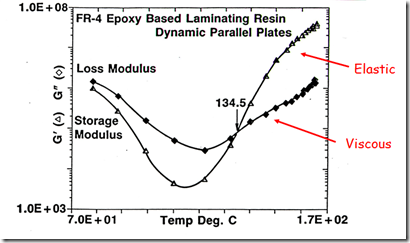 Now let’s look at a plot of the complex viscosity as a function of time for a wide range of heating rates. 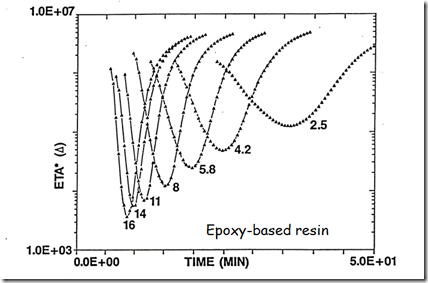 Another interesting feature in the above graph is that the complex viscosities asymptotically approaches the same value.  As stated above, the fully cured Tg is well below the cure temperature so the crosslinked network is building in the rubbery (elastic) phase.  Additionally, the data was obtained using small amplitude oscillatory measurements, so viscosity data can be obtained even past the gel point.