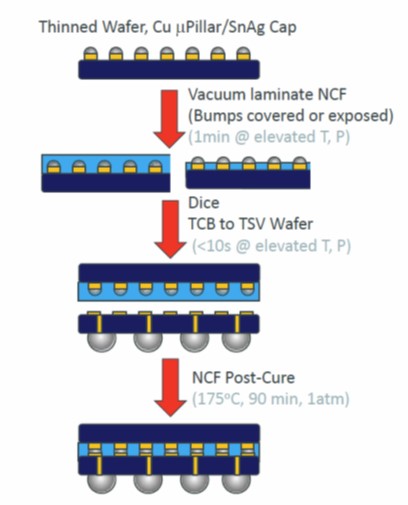 The last post provided an introduction to non-conductive film used in wafer-level underfill.  The image above from Dow Electronic Materials shows the overall process flow for a NCF.  For the most part, the NCF materials are used in conjunction with copper pillar interconnects as shown in the top image in Figure 1. The solder cap is typically a lead-free material, either SnAg or SnAgCu.  The NCF lamination process leaves the tips of the copper pillars either covered or exposed as shown in Figure 1.

The geometry of the copper pillars used in a Namics test vehicle are shown in Figure 2. 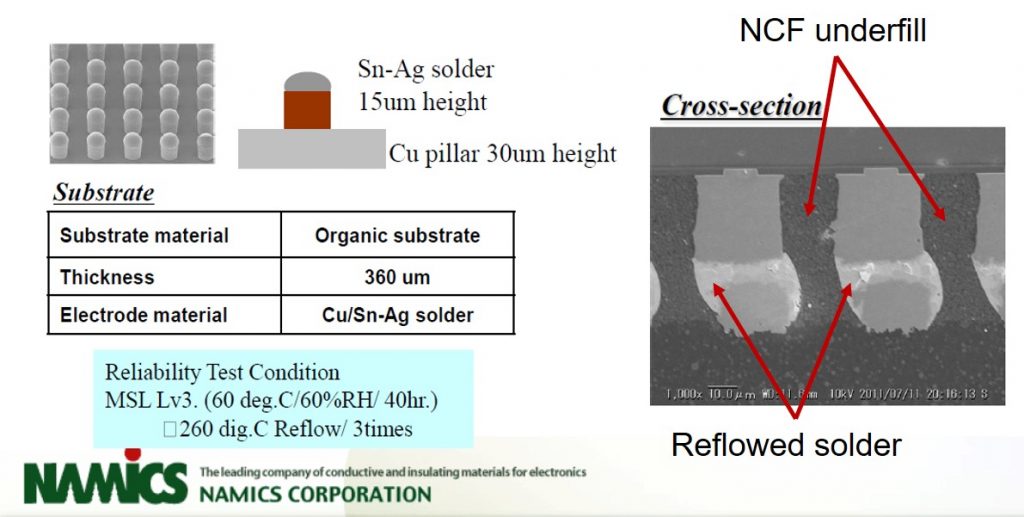 The copper pillar provides a robust interconnection during thermocompression bonding.  During the initial development of the TC bonding process, lead-free or high-lead bumps (spherical) were used.  Control of the bump collapse during TC reflow was difficult and required precise force and Z-height control.  The photograph on the right in Figure 2 shows a cross-section of two copper pillar joints after TC bonding.  Note that the NCF underfill has completely filled the gap between the pillars with no voids and the solder has reflowed around both the pillar and the pads.

The temperature profile of the thermocompression bonding process used for NCF is shown in Figure 3. 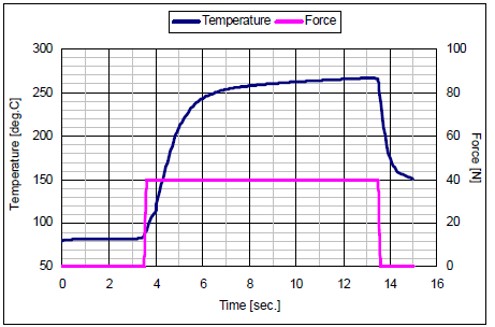 During the NCF lamination process, the film softens and flows around the copper pillars, wets the pillars and substrate, thus fully encapsulating the interconnects.  In contrast with non-conductive paste (NCP) where a two-step process was required (see previous post) to flow the NCP around the pillars, the NCF TC bonding process utilizes a single stage heating and pressure profile (i.e. single heating ramp to the solder reflow temperature).  Figure 3 is a plot of the temperature of the bonding heat as a function of time along with the pressure applied to the chip by the bonding head.

Readers of previous posts on thermoset rheology will recognize that a B-staged film (such as NCF) will undergo a large decrease in viscosity during a rapid heating ramp to the reflow temperature.  The viscosity profile was shown to have a large influence on the joining process [1, 3]. 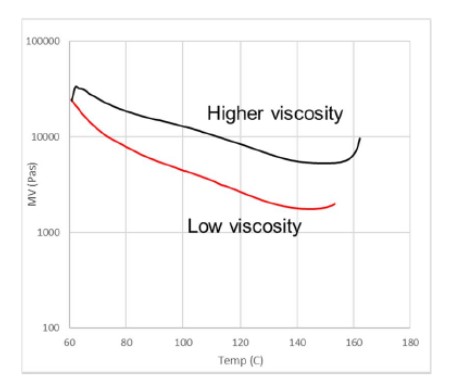 Figure 4. Viscosity plotted as a function of temperature for two NCF materials (Henkel [3])

In a subsequent experiment, the impact of the viscosity was evaluated in terms of how well the copper pillars reflowed during TCB.  The viscosity was found to have an important role in the successful interconnect formation as shown in Figure 5. 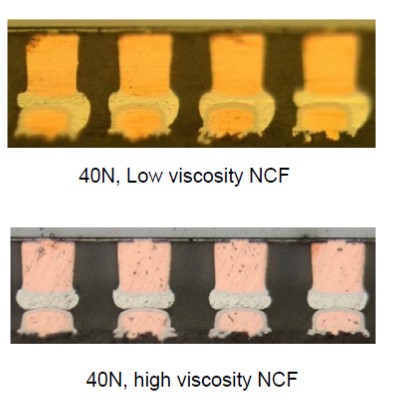 Note that in the case of the high viscosity NCF, the solder tips did not adequately flow and wet the pads on the substrate.  Since the TC bonding process is very fast, small changes in the viscosity (i.e. the resistance to the vertical movement of the top pillar) was shown to have a measurable impact.  Additionally, the curing profile will also impact the ability of the copper pillars to come in contact with the substrate pads.  Henkel also presented that a free radical curing system was used which would result in a very fast cure rate.  Recall that for a B-staged thermoset film, the viscosity profile has the characteristic U-shape.  The curing rate will have a large impact on the minimum viscosity and the total flow time.