The last post described some of the new developments in film-based epoxy mold compounds from Hitachi Chemical (EBIS) and Ajinomoto (see image above courtesy of Ajinomoto Fine-Techno).  The main driver for panel level processing is to reduce cost.  Another area where there is an opportunity to reduce cost is in the redistribution layer process.  The main dielectrics used in wafer-based fanout is photosensitive polyimides and polybenzoxazole (PBO) positive tone resists.  A commonly used positive tone photosensitive PBO is HD8940 (Hitachi DuPont).  A challenge has been to lower the cure temperature of the PBO and polyimides to be less harsh on the epoxy mold compounds.

The Uni-SIP process used Ajinomoto Build Up Films (ABF) for the redistribution layers.  The cross-section of the package is shown in Figure 1. 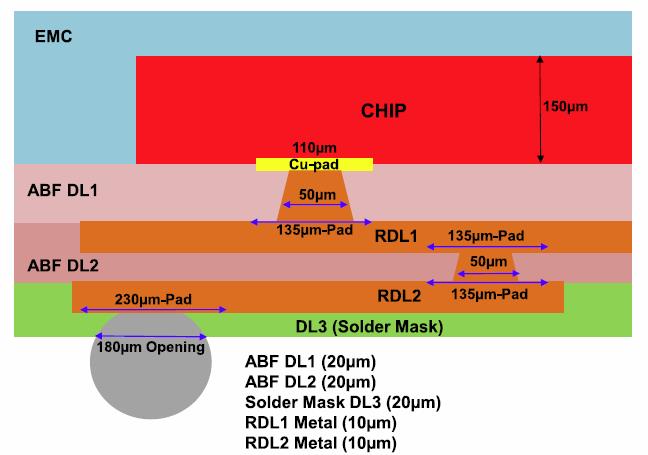 In this case, a liquid epoxy mold compound from Nagase (R4507) was used in a modified compression molding process.  The EMC had high filler loading (85%) and a Tg of 150°C (DMA). The CTE below Tg was 10 ppm/K.  The redistribution layers were fabricated using Ajinomoto Build Up Films.

Figure 2 shows the attributes of the ABF type of RDL (courtesy of Ajinomoto Fine-Techno).  The ABF films are negative tone materials, that is they crosslink under UV exposure and thus the exposed area is rendered insoluble.  Recall that positive tone PBO and PI RDL dielectrics become soluble under UV exposure, the opposite of a negative tone resist.

Figure 2. Characteristics of Ajinomoto Build Up Films used for redistribution layers in a panel level process (courtesy of Ajinomoto Fine-Techno).

In Figure 2, the optical photograph shows the ABF approach is capable of 2 µ lines and spaces and 5 µ diameter UV laser drilled vias.  The ABF dielectric layers are vacuum laminated onto the panel using printed circuit board methods.

The properties of the ABF layers are shown in the following table from reference [1].

The Ajinomoto build-up film RDL layers are highly filled (80-82% loading) resulting in a low CTE in the range of 7-8 ppm/K.  Note that this is very close to the CTE of the Nagase R4507 epoxy mold compound.  The dielectric constant is important in the RDL since the signal speed will be impacted by the Df of the RDL layer.

A future post will cover the recent advances in build up films from both Ajinomoto and Sekisui.