Latent curing agents for epoxy resins allow for the creation of stable one component formulations used in adhesives and composites that have outstanding high temperature and mechanical properties.  In order to activate the latent curing agents, heat is required to initiate the reaction.  Industrial processes however are continuously being optimized, with the heat required to cure being lowered and the time to cure being shortened in order to keep the overall cycle time low.  Therefore latent curing agents for epoxy, such as dicyandiamide, also make use of an accelerator to lower the cure time and temperature.  The most used accelerator for dicyandiamide is a urea-based structure.  Common structures of urea accelerators are shown in Figure 1.  The urea portion of the structure is highlighted in red. 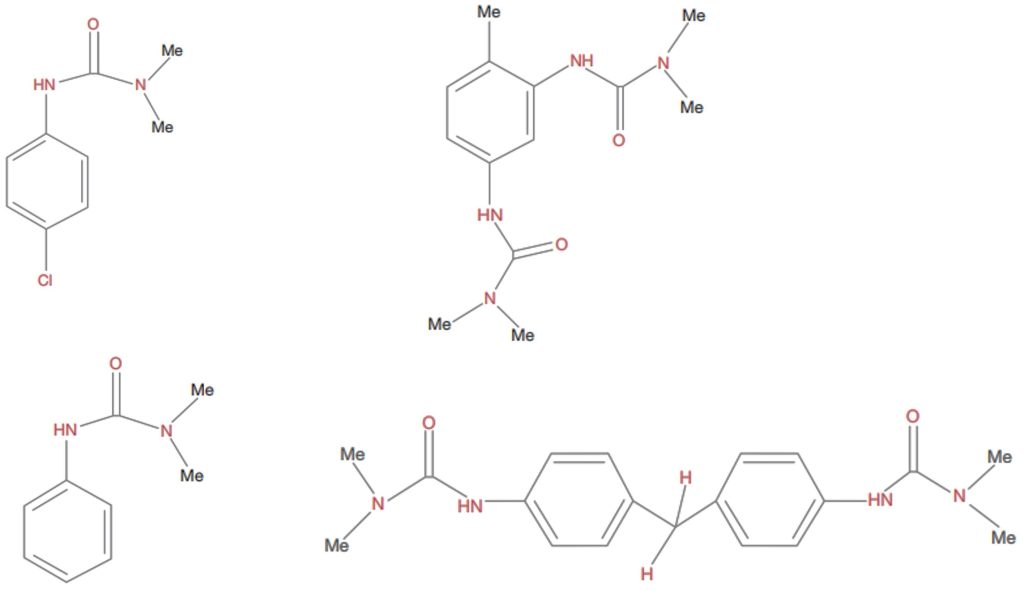 The substitution on the urea group can affect the following properties of the epoxy formulation:

It can be noted that in Table 1, there are two different entries for 4,4’ methylene bis (phenyl dimethyl urea) with slightly different melting points.  Depending on the starting raw materials and synthesis conditions, the final product can vary slightly and can give a different reactivity and stability profile.  When formulating a one component epoxy formulation using dicyandiamide and urea accelerators, a typical formulation would contain the following:

Table 2.  Latency of Urea Accelerators, Most Stable to Least Stable

As stated previously, the least latent urea accelerators tend to give the largest decrease in cure time and temperature.  Table 3 gives a ranking of the urea accelerators in terms of their reactivity, measured as the time to reach 95 percent cure at 120˚C, measured by DSC.

Table 3.  Reactivity of Urea Accelerators, Most Reactive to Least Reactive

Comparing Table 2 and 3, the most reactive urea gives the least shelf stable formulation, and the least reactive urea gives the most shelf stable formulation.  One interesting note on the comparison of Tables 2 and 3 is the 4,4’ methylene bis(phenyl dimethyl urea) with melting point of 220 to 230˚C is the second most stable of all of the urea structures, and also has the fourth highest reactivity.  This is a unique structure that gives a very good balance of reactivity and stability, making it a popular choice in stable one component formulations.