Monomer selection for cationic UV resins is somewhat limited compared to acrylic-based UV resins. Most cationic UV resin formulations are cycloaliphatic epoxy based as the epoxide group on these molecules tends to be the most reactive compared when to linear aliphatic (though vegetable oil-based epoxy derivatives are becoming popular) or aromatic epoxy molecules. A side perk for the electronic industry is the excellent electrically insulating properties of cycloaliphatic epoxies, making them strong candidates for glop top and encapsulant applications. Two cycloaliphatic molecules that form the basis for many UV cationic resins are shown below in Figure 1.

Using ECC as an example, a polymerization process linking ECC molecule’s together produces a tight network of polar group and as such creates extremely brittle polymer product. This brittle network is shown below in Figure 2[1].

To combat this brittleness many UV cationic resins will employ polyols as reactive diluents and performance modifiers. The polyols act as monomeric materials, reacting into the epoxy network. As opposed to the limited cycloaliphatic epoxy selection, many different polyols are available ranging from di and tri-functional glycols, polycaprolactone oligomers, and even high order dendritic polyols to help tune end use properties.

During cure, UV cationic resins exhibit a unique phenomenon commonly referred to as “dark cure” or “shadow cure”. The photo-generated acids from cationic photoinitiators have extremely long active lives in solution, capable of inducing polymerization for time lengths on the order of days; whereas free-radicals have active lives measured in seconds or fractions of seconds. This long active life implies that, once generated, these reactive sites will continue to migrate through and polymerize monomers until all monomers are consumed without continued exposure to UV radiation. While you can fully polymerize cationic resins under a UV source, this dark cure phenomenon implies you do not have to. Your process can, to increase throughput, generate all photo acids and partially polymerize while under UV exposure but move the part down the production process and allow full-cure to happen at a later time. Additionally, the photoacid migratory effect allows for full-cure of complex geometries that may have portions of the part that are showed from direct UV exposure. Figure 3 below fully demonstrates the dark cure’s full potential (image courtesy of Excelitas Technologies). 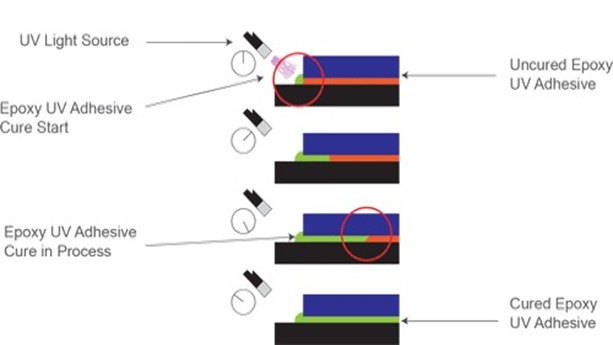 A potential drawback for most free-radical, acrylic UV resins is shrinkage during polymerization which has the potential to impart cure stresses within the coating and final part. As acrylic monomers polymerize and attach themselves to each other the intermolecular distance between adjacent monomers slightly drops. We can observe this drop in intermolecular distance at the macroscopic scale as an increase in density or physically measure the shrinkage rate before and after cure. While cationic monomers are connecting to each other during polymerization and reducing space between adjacent monomers as well, the connection process requires the cyclic epoxide group to open (see last week’s blog #5) “extending” the length of the molecule. In most cases, this molecular “extension” balances out the loss in intermolecular spacing during polymerization and as such, cationic UV resin the polymerization process does not see significant shrink rates, making the resins perfect for electronic encapsulating applications.

No resin system works perfectly in all environments and cationic UV resins are no exception: moisture has the potential to retard, rather than inhibit, cationic polymerization. In controlled manufacturing environments where ambient humidity is controlled, the effect of moisture will not pose any significant challenges. Only those environments that are subject to significant seasonal variation in ambient humidity will need to address the effect of moisture. Addressing moisture for cationic resins is not too challenging if relative humidity stays below 70-80%, production engineers and personnel simply need to diligently monitor environmental conditions. As mentioned above, moisture serves to slow polymerization, not inhibit it and can therefore be addressed in several ways. One can account for the slowed reaction by increasing cure times but this method is usually not desirable in manufacturing environments (although it can be used in quality control laboratories). Localized environmental conditioning at points just prior to and during curing with either a dry air blanket or heating elements can draw moisture away from the resin.

Our next post will begin to discuss UV light sources and process exposure calculations.